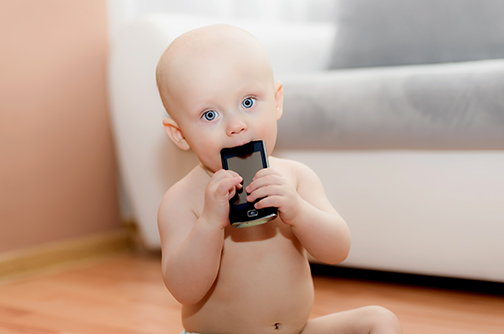 Recently our editorial director was in a doctor’s office waiting room, watching a very cute little boy. To keep him from complaining during an arguably long wait, his mother offered him her cellphone. The baby eagerly took it. We have all been there and done that. Then the boy teethed on it.

Parents today rely on electronics to pacify their kids. In this digital age, it’s impossible to go out to dinner or ride a bus without seeing multiple kids glued to a tablet. This is to say nothing of Skyping with working parents, app overload, or nursing mothers texting over babies heads. But watching a kid use a cellphone as an actual pacifier was a first—for us.

To help explain the potential health impacts of electronics and wireless devices around growing bodies—and in little mouths—we reached out to our trusted pediatric advisor and board member Dr. Leonardo Trasande, Associate Professor of Pediatrics and Environmental Medicine at New York University School of Medicine. Parents need all of the advice they can get at a moment when wearables that track infant’s vital signs are entering the mainstream, iPad covers are being sold by Fisher Price with baby toys like abacuses built in, and people around the world are worrying about cellphone towers on top of schools and the health effects of Wi-Fi within them.

It turns out that it’s a smart precautionary step to curb any non-necessary game playing or other screen time. Also? Don’t let your kids chew on cellphones! They can contain over 40 hazardous chemicals and heavy metals. And while today’s iPhones are said to be the least toxic ever sold, tests conducted on the button, case, and screen still found that these parts contained chlorine, mercury, chromium, cadmium, and other unsafe-for-kids substances. Play tablets—even those made specifically for children—aren’t much better. One study of popular brands found every model tested contained detectable levels of one or more materials of concern like arsenic, antimony, chromium, and lead as well as high levels of bromine and chlorine, the respective markers for PBDE flame retardants.

1. Q: We all use electronics as a parenting crutch—a lot or a little from time to time. What could be harmful about letting a kid play—and even chew on—your cellphone?

A: You’re putting the highest amount of radiofrequency emission from the device near developing organs like the brain and other vulnerable organs like thyroid or pituitary. We can’t quantify the concerns, but from labs we do know there is a plausibility that those types of energies can have impacts at least in cells and in tissues. The exact meaning for an individual child is really unclear. Children have developing organs. There is a lot we don’t know but we do know there is cause for concern. We need better studies and those should continue but there are that doesn’t excuse one from taking some common sense steps. At the very least this begs for proactive and precautionary steps to try to reduce exposures when possible. Use earbuds on the phone rather than hold to your ear. As for chewing, there is a remote possibility of exposure to what’s in the battery.

A: Because the technology is so rapidly evolving even the studies that carefully measure exposure sometimes lag behind more relevant exposures. With cellphones, different technologies can produce differential risk. Research may be dated as respect to what is occurring in real time. There are also serious difficulties in studying the exposure. There are so many devices. Asking families to report exposure at home doesn’t report proximity of neighbors with electronic devices and radiofrequency towers. There are also flaws to the existing studies that have raised concern. This is difficult research in general. Cancer in children, one of the major concerns, is hard to study in large population samples because it is fortunately extremely rare. The larger the sample, the more resources you need. In the context of limited resources, it’s difficult to do the study, especially taking into account the other environmental exposures that may contribute to cancer.

3. Q: What are the various specific issues parents should be aware of—EMF? Ionizing radiation? What can we do to safeguard ourselves at home?

A: There is ionizing radiation and then there is non-ionizing. The difference is that ionizing disrupts atoms and molecules and shakes them apart and separates them to ions and electrons. Non-ionizing can excite them but not pull them out of orbit. Cellphones are in non-ionizing radiation category. They have less energy than ionizing that we think of with x-rays and other technology. Wireless networks are also non-ionizing. We are talking about a less potent form of radiation, but that doesn’t mean there aren’t concerns about it. The concern is about the accumulating effect of non-ionizing radiation to do subtle things that we can’t detect—like a break in DNA—that are suggested as possible concerns.

Prevention is distance and shielding; that is why you don’t put the cellphone in your mouth. That’s too close. The further away the better but there is no magical distance. There are other sources of EMF even television, hair dryers, microwave ovens, and washing machines. They all provide these types of energy. I am not suggesting you disconnect it all and throw it all away. It’s just important to note that you don’t stand near your microwave for 24 hours when it is going on. You run it and walk away. Even a foot can substantially decrease the intensity of that non-ionizing radiation.

4. Q: Beyond environmental health, why are electronics, generally speaking, not great for kids?

A: I think is fair to say is that in general electronic devices in the hands of children come fraught with other psychosocial concerns. One is simply inactivity. It’s a screen and the American Academy of Pediatrics is very clear about guidance with respect to minimizing screen time period. Most characteristically, people think of television time as screen time. The fact remains is that all screen time comes with greater incentive for sedentary behavior and the ads linked to many programs flashed across the screens may advertise certain unhealthier food that may perturb diet that may promote obesity. And that is just one set of risks.

Then there are common sense concerns about ensuring good communication in families and the need for social interaction as a nutritive for the developing brain. Parents interacting with kids is nutritive for the developing brain. I can’t cite studies chapter and verse that examine this in a rigorous way. There are generic concerns about the potential negative impacts of transforming our society to people who would rather look at screens instead of people. As the parent of two young boys I appreciate the relief these devices can bring, but they come with their own difficulties—even extricating and transitioning kids from the device.

5. Q: Is there anything good about screen time? What’s the right balance?

A: There are studies that have used these media to help benefit in the form of programs that really inform better and actualize people to try to pick healthier foods or try to learn words and decode them better and read faster and do math faster. We can make a careful distinction between those benefits, which shouldn’t be completely eliminated, and the more pervasive concern about defaulting to screen time.

• 5 Questions with Dr. Tavyev-Asher: Neurotoxins on our mind

7 Easy Ways To Make the Rest of Summer Non-Toxic

BPA-free plastics promise more safety and less worry—but are they REALLY all that much safer? What are they using instead? … More ›

Nsedu Obot Whitherspoon is our July 2022 Mom on a Mission Finalist!