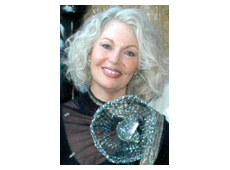 Nancy is the founder of Healthy Child Healthy World, which was originally established to honor the Chuda’s only child, Colette. Collette died in 1991 at the age of five due to a rare, non-genetic form of cancer. Since launching both the Colette Chuda Environmental Fund and Healthy Child Healthy World, Nancy has won numerous awards for her advocacy. The California League of Conservation Voter’s Environmental Leadership Award, The Healthy Schools Heroes Award, were presented to both her and her husband James Chuda by Governor Gray Davis for their legislative efforts in securing The Healthy Schools Act which was signed into law in September, 2000. Nancy Chuda is a seasoned broadcast journalist, television writer/producer, talk show host and author. Her career spans over three decades having appeared on both national and cable television. She is also the founder and Editor-in-Chief of LuxEcoLiving, an online magazine, blog which encourages a healthy eco-rich and vibrant lifestyle and provides a platform for people to express their views.

For Nancy’s full biography, please visit her profile on LuxEcoLiving.