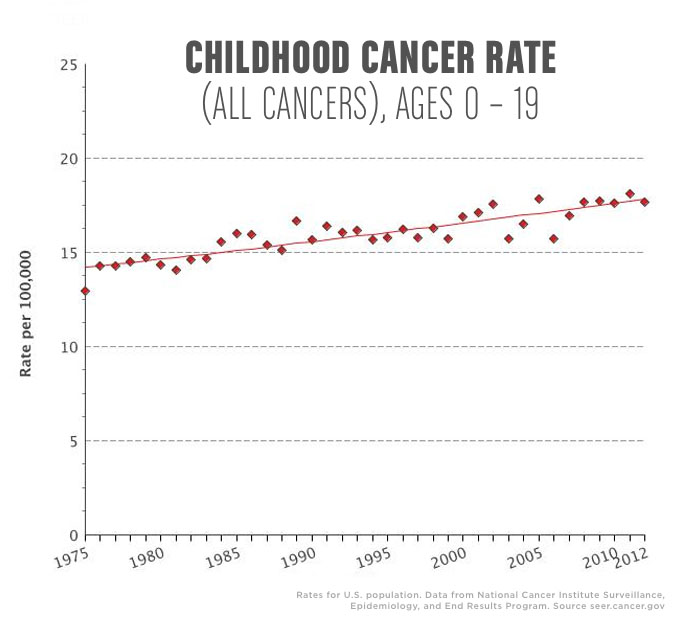 What causes childhood cancers is not fully understood, making prevention difficult. But as scientists and doctors seek answers for the steady rise of childhood cancer rates, more and more evidence points to environmental factors.

Children are particularly susceptible to exposure to harmful chemicals – in their homes, at school, in their food and many other pathways. Because they are smaller, children are more highly exposed for their weight than adults. Children’s bodies also are undergoing critical stages of development.

Numerous studies have shown links between childhood cancers and exposure to chemicals such as pesticides, benzene and arsenic. EWG has found that not only are these substances widespread in a child’s living environment, they can also be passed on from mother to child during pregnancy and through breastfeeding. (Despite this, the health benefits of breastfeeding greatly exceed the risk of chemical exposure.) These prenatal and early life exposures occur during the most vulnerable period of a child’s development.

Now new research shows that environmental exposures can change how our genes are expressed – not genetic mutations, but whether genes are turned on or off and how they are read. These changes in gene expression, known as epigenetic changes, can also be passed on to future generations. This is not the legacy we want for our children – but it’s a future U.S. chemical law does little to head off.

There are more than 80,000 chemicals on the market today. The great majority has never been tested for safety and new chemicals are continually being put on the market without safety tests. This broken system is the opposite of how chemicals are regulated in Europe, where manufacturers must prove a chemical is safe before introducing it to commerce. Reform of the Toxic Substances Control Act, which has not been updated since it became law in 1976, must prioritize protection of public health, especially during critical developmental periods.

In the meantime, there are steps that parents and all of us can take to reduce exposure to pesticides around the home and harmful chemicals in our personal care products and the household items we use. With more consumer concern, stronger chemical laws and continued advances in treatment, the day may come when Childhood Cancer Awareness is a time to mark progress toward prevention instead of lamenting the grim reality of the disease.

Wellness Chat: The Importance Of Nutrition In Cancer Prevention

Check Your Home for Cancer-Causing Radon

Tips for Health from a Doctor and Mom