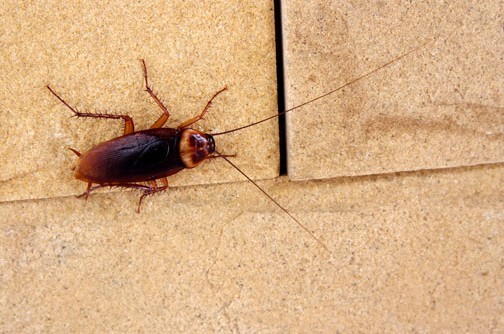 Cockroaches Are Even Creepier Than We Thought! (And They Can Cause Allergies!)

Urban environments have much to offer young families: public transportation, playgrounds galore, and plenty of entertainment for culture-starved parents.

They’re also filthy. But who would have thought that one of their dirtier attributes (pollution) contributes to problems caused by another (cockroaches)? Scientists have recently discovered that’s exactly the case.

Asthma triggered by cockroach allergens is something urban parents know a thing or two about. Now a new study conducted by the Columbia Center for Children’s Environmental Health links air pollution to an increased risk of kids getting cockroach-related allergies and asthma.

It comes down to fetal exposure to pollutants called polycyclic aromatic hydrocarbons (PAHs). PAHs are combustion byproducts created when fossil fuels like diesel and home heating oil are burned. Researchers measured the amounts found in the homes of 349 pregnant women in New York City. Household levels of cockroach allergens like waste proteins and saliva (ew and ew) were also recorded.

The risk was especially high in children who had a common mutation in the gene known as GSTM, which occurs in about 40 percent of the population. It has been known for some time that diesel pollution alters the immune system, making people more allergy prone, and that the GSTM gene plays a role in detoxifying PAHs. But the fact that fetal exposure to PAHs seems to be a key contributor to childhood cockroach allergies is news.

The relationship between PAHs and cockroach allergies illustrates the interconnected complexity of allergy and asthma factors. It also highlights the need for multi-pronged approaches to fighting these illnesses.

In this case, prenatal and early childhood intervention where both pollutants are concerned may help lower rates of asthma. Parents can work to keep cockroaches (and their allergens) out of the home, including sealing holes and keeping clean, especially in the kitchen. To reduce PAHs, indoor air filters may be beneficial.