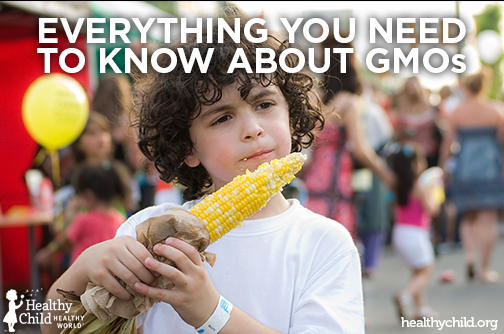 Everything You Need To Know About GMOs

Consumers have the right to know if their food has been genetically engineered. However, the US government does not require labeling of such foods so that shoppers can make informed decisions.

Scientists have not determined whether GE foods pose any risks to human health. Still, consumers have many good reasons to avoid eating genetically engineered ingredients.

Here are a few reasons to avoid GE foods:

The agricultural chemical industry developed genetically engineered crops and introduced them to the market with the promise of significantly higher crop yields. While crop yields may in fact be on the rise, the contribution of GE technology is a matter of considerable debate. Some groups attribute the increase in yields to improvements in conventional agriculture.

Any benefits provided by GE technology have been overshadowed by increased use of toxic pesticides and proliferation of herbicide-resistant weeds.

Until Congress or state governments enact mandatory labeling of GE ingredients in food, American shoppers are left in the dark. So if they want to avoid food with GE ingredients, what are they to do?

The four most common GE foods and ingredients

Avoiding GE ingredients isn’t easy. In fact, some estimates indicate that more than 75% of the food in supermarkets is genetically engineered or contains GE ingredients. Consumers need to know what to look for to make informed purchasing decisions.

The U.S. is the world’s largest corn producer. According to the USDA, last year, American farmers planted more corn than any other crop, covering 95 million acres. Some 90% of corn grown in the US is genetically engineered. Most of the crop is field corn cultivated for animal feed, but about 12% is processed to corn flour, high fructose corn syrup, corn starch, masa, corn meal and corn oil that end up in foods consumed by people. Consumers should assume that ingredients in processed food are genetically engineered. (Less than 1% of the American corn crop is sweet corn, also known as table corn.)

Soybeans are the second most planted American crop, covering more than 76 million acres last year. Some 93% of soybeans grown in this country have been genetically engineered. Soybean-based products and soybean-derived ingredients are common on supermarket shelves. Consumers should assume that products whose labels disclose the presence of soy proteins, soybean oil, soy milk, soy flour, soy sauce, tofu or soy lecithin have been made with GE ingredients unless they are certified organic or GE-free.

About 55% of the sugar produced in the U.S. comes from sugar beets, 95% of which have been genetically engineered. If a product label does not specify that it has been made with “pure cane” sugar, chances are significant that it contains GE beet sugar.

According to the Hawaiian Papaya Industry Association, more than 75% of Hawaiian papaya is genetically engineered to resist the ringspot virus.

A few varieties of squash are genetically engineered. Without adequate labeling, concerned consumers can’t spot GE varieties. If you want to be sure, opt for organic varieties.

Most sweet corn sold in supermarkets and farm stands is not grown from genetically engineered seeds, but a few varieties are, so it’s best to buy organic sweet corn.

The Truth Behind “Organic” Cosmetics