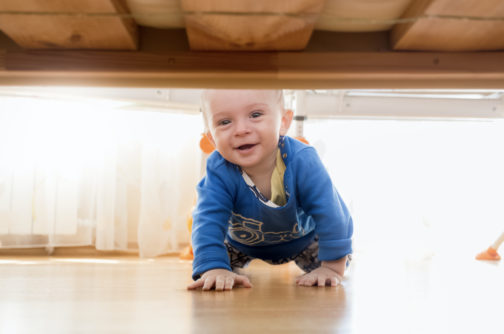 In a shift that could help hundreds of thousands of U.S. children, federal health officials are considering whether to lower the threshold for identifying kids with elevated levels of lead exposure.

Scientists at the U.S. Centers for Disease Control and Prevention will meet next week to decide whether to lower the national action level for lead in the blood of children under 6 years old by 30 percent. No level of lead exposure is safe, but for children with the poisonous heavy metal in their blood at or above the action level, the CDC recommends that doctors and local or state health agencies provide additional care.

Since 2022, the action level has been five micrograms of lead per deciliter – about three ounces – of blood. The CDC is proposing to lower it to 3.5 micrograms. More than half a million American children, or roughly 2.5 percent of the nation’s children ages 1 to 5, exceed this level in their blood.

Dozens of long-term studies show that kids with greater lead exposures have a harder time in school, have lower IQs, are more likely to need special education and are less likely to hold jobs as adults. Lead is especially toxic to toddlers as their brains are still developing, and they are more susceptible to absorbing and retaining lead.

These efforts resulted in a major drop in lead exposures for American children. Average blood lead levels dropped from more than 20 micrograms per deciliter in the 1970s, to four micrograms in 1990, to less than two micrograms a decade later. 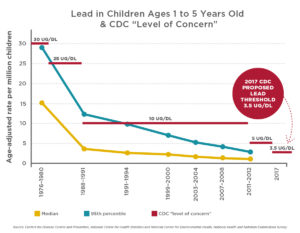 As lead levels declined, scientists were able to study the effects of lower concentrations of lead exposure during childhood. They found evidence of learning and behavior problems with increasingly low levels of lead. The CDC changes the threshold for identifying children with high lead exposures periodically to reflect national averages found in the National Health and Nutrition Examination Survey.

Economists estimate the financial benefit of reducing lead exposures from the 1970s to 1999 as $110 billion to $319 billion in lifetime savings just for children born during a single calendar year. A 2009 study of lead-based paint remediation found that every dollar invested in removing lead hazards in housing returns $17 to $221 in economic benefits.

But the problem hasn’t gone away. A recent Reuters investigation found almost 3,000 communities with reported blood lead levels twice as high as those in Flint, Mich., where improper water treatment caused a spike in childhood lead levels and brought the city’s crisis national attention.

If you have young kids, it’s important to find out whether there’s any risk that they might be exposed to lead, especially if you live in an older home. Many toys and other consumer products imported into the U.S. have also been found to contain lead. Ultimately, the national lead problem will only be solved with increased federal support for inspecting and  removing lead-based paint, and filtering lead out of drinking water.

Male Exposure to Chemicals Linked to Longer Time to Conceive

Toxic Contamination Begins in the Womb