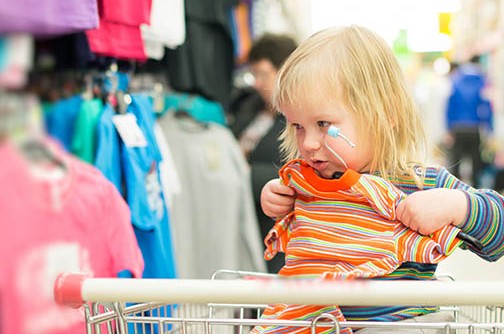 Unless fashion is a big deal in your family, chances are the only time you really think about clothing is while doing (endless amounts of) laundry. Dressing them day after day in clean outfits that fit growing limbs, free of stains, holes, and egregious color clashes is more than enough consideration. But new evidence suggests that our assumptions and ignorance about clothing’s general safety is unraveling.

Tests conducted in Britain by Greenpeace have found residues of hazardous chemicals in children’s clothing and shoes sold by major brands including Disney, Gap, American Apparel, Nike, Adidas, and Burberry. Eighty-two items were studied, and traces of toxins were found in all but six.

Let that sink in for a moment. Yikes.

The chemicals detected included hormone disrupting nonylphenol ethoxylates and phthalates, reproductive and immune toxins in the perfluorochemicals family, antimony, a material similar to arsenic, and organotins, which can damage immune and nervous systems.

Greenpeace said that while amounts were small and there’s no evidence that children wearing the items would be harmed, precaution nevertheless called for an end to their use in textile production.

The new study comes on the heels (literally) of a report from Hong Kong detailing the discovery of high levels of chemical threats in children’s plastic and rubber shoes. Tests on 28 pairs of casual footwear found carcinogenic polycyclic aromatic hydrocarbons in 25% of the shoes—some at levels far higher than many nations’ regulations allow. In addition, phthalates were found in 15 pairs, 12 of which contained amounts higher than permitted in places like California and Turkey.

Though many of the offending items in both studies were made in China and bought overseas, it’s an issue that’s also hiding in American closets. The Greenpeace study included garments made and purchased in the U.S.

Until manufacturers change their ways, here’s what parents can do:

Read more on this topic:

Preventing Cancer Is Not a Game of Chance