Air & Water
Is Fluoride in Drinking Water Healthy for Kids? 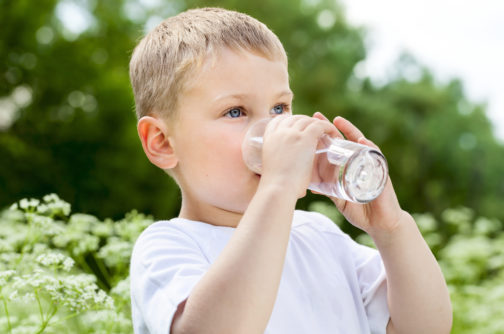 Is Fluoride in Drinking Water Healthy for Kids?

Healthy Child recommends breastfeeding if possible for at least the first 12 months of life. However, while there are valid reasons a family might need to use formula, infants who drink formula are at greatest risk of a common side effect.

Parents have plenty of reasons to worry about safe drinking water these days. From lead and PFOA to perchlorate and atrazine, heavy metals and toxic chemicals in water systems harm health and the environment.

But municipal utilities have purposefully added another chemical to drinking water with the goal of making us healthier: fluoride.

Over the past 70 years, drinking fluoridated water has been shown to reduce tooth decay in both kids and adults, sparing discomfort and saving money for families and the American health care system alike. The Centers for Disease Control and Prevention named drinking water fluoridation to its list of the 10 great public health achievements of the 20th century. Click here to see what U.S. Surgeon General Vivek H. Murthy says about community water fluoridation.

The primary health concern: dental enamel fluorosis; and the most vulnerable group: newborn babies who drink formula. About a quarter of infants born in the U.S. each year drink formula from birth. By the age of three months, 2.7 million American infants, two-thirds of their age group, drink some amount of formula.

Thanks to low cost and convenience, powder and liquid concentrate formulas are popular with parents and caregivers. But when these formulas are mixed with fluoridated water, babies up to six months old drink considerably more fluoride than other age groups. At three months, formula-fed babies may drink as much as 10 times the tap water that adults drink, based on their body weight.

This over-exposure can lead to dental fluorosis, which causes white lines, spots, staining or pitting to form on teeth and may weaken teeth as they emerge from the gums. Rates of dental fluorosis appear to be increasing. Some scientists have expressed concern that too much fluoride may affect other bones and neurodevelopment. The National Toxicology Program recently launched a new evaluation of the effects of fluoride on the brain and nervous system.

In April 2022, the U.S. Department of Health and Human Services reduced its recommended level of fluoride, issued in 1962, from a maximum of 1.2 milligrams fluoride per liter of water to 0.7 milligrams per liter. The lower level aims to balance the benefits to teeth against the risk of dental fluorosis.

The National Toxicology Program, a division of the National Institutes of Health, is investigating evidence that fluoride exposures could disrupt hormones, cause cancer or alter children’s brain development. The NTP expects its investigation to wind up shortly and has initiated follow-up studies to assess the safety of low levels of fluoride in drinking water.

Although the American Dental Association used to recommend fluoride-free water for formula-fed babies, it backed off this warning when the HHS lowered its recommended fluoride limit. Officials at Centers for Disease Control and Prevention now suggest that parents used some fluoride-free water when mixing baby formula. Click here to learn more.

Talk to your dentist and pediatrician if your baby shows signs of dental fluorosis or if you’re concerned about the amount of fluoride your family is consuming. Note that fluoride can come from multiple sources. As babies begin eating solid foods and reduce their formula intake, their exposure to fluoride goes down, but the chance of developing fluorosis continues until teeth have fully developed, around age eight.

If you notice some harm to your baby’s tooth enamel, sucrose may be to blame instead of fluoride. Sucrose, a sweetener commonly found in lactose-free and other formulas, can cause plaque build-up. Some antibiotics, including amoxicillin and tetracyclines, can stain baby teeth.

As children get older, they can use fluoride toothpaste and mouthwash to strengthen teeth with less risk of over-exposure. Use non-fluoridated toothpaste for children until they can reliably rinse and spit out toothpaste. Usually this happens between two and three years old. Once they begin using fluoride-containing toothpaste, choose a child-specific brand that has slightly lower concentrations of fluoride. You should supervise tooth-brushing to ensure that kids don’t swallow toothpaste.

You may be among the 25 percent of Americans without regular access to fluoridated drinking water. Talk to your dentist about options: she may recommend fluoridated toothpaste or mouthwash – topical fluoride is best – or fluoride supplements if your family isn’t getting enough. Babies should not be given fluoride drops.

How to Mix Your Baby’s Formula with Safe Water