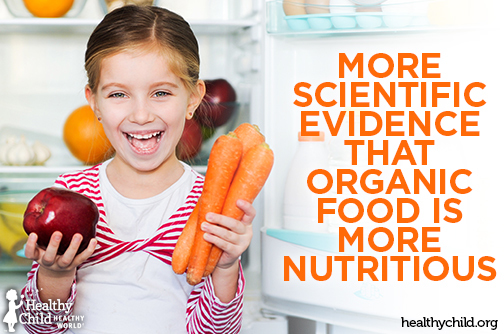 From our Parent Organization EWG

A new study led by a team of scientists at Newcastle University in England provides the most compelling and comprehensive evidence that organic crops are more nutritious than their conventional counterparts, Environmental Working Group said in a statement today.

“There should be no question now about whether organic agriculture is better for the environment and public health,” said Ken Cook, EWG’s cofounder and president. “This study breaks it down for consumers who want science-based evidence on the nutritional benefits of crops grown without pesticides or synthetic fertilizers.”

Published in the British Journal of Nutrition, the analysis found that organic produce and grains have higher concentrations of antioxidants, lower levels of cadmium and nitrogen compounds and fewer pesticide residues. The scientists reached their conclusions after a review of 343 previously published, peer-reviewed studies comparing organic and conventionally grown crops.

Washington State University research professor Chuck Benbrook was the only American co-author of the study.

According to a WSU press release about the findings, “consumers who switch to organic fruits, vegetables, and cereals would get 20 to 40 percent more antioxidants. That’s the equivalent of about two extra portions of fruit and vegetables a day, with no increase in caloric intake.”

Antioxidants are thought to help prevent a variety of diseases, including coronary heart disease, stroke and certain cancers.

Conventional crops had twice the amount of cadmium and were three to four times more likely to have pesticide residues than the organic versions, the Newcastle study found. Cadmium is a highly toxic heavy metal contaminant that has been linked to kidney failure, bone softening liver failure and lung cancer.

EWG releases its Shopper’s Guide to Pesticide in Produce™ each year to highlight the fruits and vegetables with the highest amounts of pesticide residues. Millions of consumers rely on the guide to make smarter shopping decisions for themselves and their families. Pesticide exposure has been linked to cancer and neurological damage and impaired intelligence in children.

Five Things You Don’t Know Your Kids Are Eating

Children’s Health Gets the Spotlight at Annual Gala