The study enrolled 40 Mexican-American children, 3-6 years old: 20 from an urban neighborhood in Oakland and 20 from the nearby agricultural Salinas Valley. The scientists swapped out non-organic food for organic in the kids’ diets and measured the concentrations of pesticides in urine.

In both communities, the amount of pesticides in the children, as measured by breakdown products (metabolites), plummeted after they switched to organic food. Metabolites of two neurotoxic organophosphate pesticides dropped by an average of 40 percent and 49 percent. Levels of the weedkiller 2,4-D, a possible carcinogen, dropped by 25 percent. 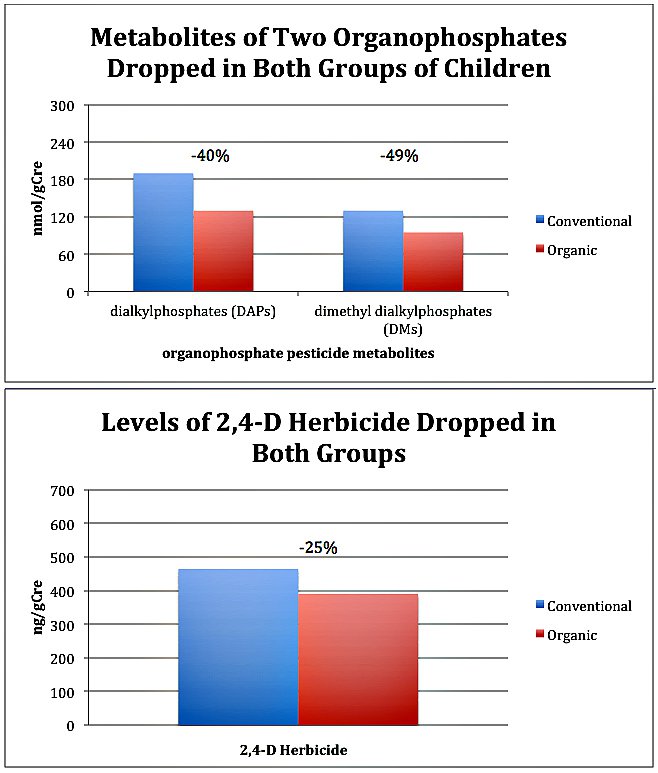 The study — which was done by researchers at University of California, Berkeley, University of Maryland and Emory University led by Dr. Asa Bradman — contributes to the mounting evidence that consuming organic foods can reduce the amount of pesticides in our bodies. In addition to reducing the “pesticide burden,” organic crops appear to have higher concentrations of antioxidants and lower levels of cadmium and nitrogen compounds than their non-organic equivalents.

By choosing USDA-certified organic food, you’ll also know that you and your family are not eating GMOs – genetically engineered crops that are nearly all grown to withstand massive amounts of weed-killing chemicals. Since the vast majority of conventional foods on store shelves today do contain GMOs and the government does not require GMO labeling, this is the only option for consumers who wish to avoid them.

If an all-organic diet isn’t in the cards, you can consult EWG’s Shopper’s Guide toPesticides in Produce. It includes the Dirty Dozen Plus list of non-organic produce with the highest pesticide loads and the Clean Fifteen list of fruits and vegetables that are least likely to have pesticide residues. GMOs are uncommon in the produce aisles of the grocery store.

Watch this video to learn about an earlier study that looked at what happened in one family when it switched from conventional food to organic. The study was conducted by the Swedish Environmental Research Institute IVL.

Check Your Home for Cancer-Causing Radon