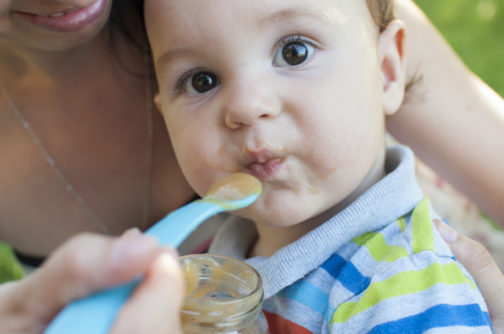 Latest tests from the U.S. Department of Agriculture reveal important information about the safety of foods your baby may be eating. Here’s a look at the results – and what they mean for your family.

What do the USDA data show?

The results were mixed: Jarred peaches, green beans and apples sauce had some detectable pesticides, while carrots, sweet potatoes and peas showed no significant amounts. Oats and rice had few detectable residues.

How do pesticide residues in baby food compare to those found on fresh produce?

Baby foods typically contain fewer pesticides than raw versions, since baby foods are cooked before packaging – a process that reduces the chemical residues.

Should I be concerned about the USDA test results?

Although USDA discovered pesticides on samples it tested, the levels fell considerably below the maximum allowable levels. Still, these levels may be too high to protect children’s health. Babies’ small, developing bodies are more vulnerable to the effects of pesticides than adults, and their diets are generally less varied.

The Environmental Protection Agency sets limits for pesticides in foods that serve all populations, but the U.S. has no specific laws or regulations to limit pesticides in baby food.

That means some American baby foods would not be permitted for sale in Europe. About a third of pears, applesauce, green beans and peach baby food would violate the European guideline for pesticides in baby food because they contain one or several pesticides at concentrations of 0.01 part per million or higher. No carrot or sweet potatoes samples exceeded that limit.

Do low pesticide levels mean a food is safe for babies?

Choosing foods that contain few pesticide residues is an important step in protecting your developing baby’s health, but there are other factors to consider as well. Rice, rice cereal and rice-based foods, while generally low in pesticide, contain too much harmful arsenic for babies to eat. Some apple and grape juices contain arsenic as well.

Are the USDA tests comprehensive?

Mostly. While USDA tests for hundreds of pesticides, it doesn’t routinely analyze them for certain chemicals, including arsenic and glyphosate, a common herbicide. Once thought to be low toxicity, glyphosate was recently deemed a “probable human carcinogen” by the International Agency for Research on Cancer, a division of the World Health Organization.

Tests would most likely detect glyphosate on genetically engineered corn and soy, since those plants have been modified to withstand it (glyphosate would kill most non-GMO plants that aren’t grasses). Glyphosate is sometimes applied to grains and may be present in oats sold for food.

I make my baby’s food at home. What do I need to know?

Homemade baby food is nutritious for babies and sensible for parents, but take care when choosing ingredients for those purees and blends. Opt for organic produce when you can and give priority to organic when you’re using the Dirty Dozen – the 12 fruits and veggies with the highest amounts of pesticide residues, according to USDA tests. Click here for more top tips on homemade baby food.

How can I limit my baby’s exposure to pesticide in food?

To learn more about pesticides in food, visit EWG’s 2022 Shopper’s Guide to Pesticide in Produce.

Q&A: Are Kids Eating Too Much Arsenic?

Kids Are on the Frontline of Pesticide Exposure

Five Essential Facts About Pesticides on Fruits and Vegetables